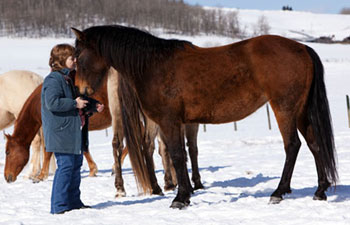 Carie grew up in rural Manitoba with a love and respect for all animals, and for nature in general. In her family home there was always room for one more stray. In 1984 Carie graduated as a Medical Lab Technologist and, with her two small children Holly and Derek, moved to Northern Alberta for employment. She eventually settled in Red Deer, where she remained until her children were grown. She then moved to the Middle East where she worked and traveled for several years. While there Carie visited more than thirty countries, usually back-packing off the beaten track and often traveling solo. She also took up Scuba diving and learned to appreciate the beauty of the marine world.

The desire to be near her children and grand-children brought Carie back to Canada in 2004. Soon after returning, the opportunity to go into an animal-related business with her daughter Holly arose and she moved one more time. She now resides in Calgary with her two Aussies, Marlin who is hearing-impaired, and Moxie who helps take care of Marlin. The newest addition to her family is a Tennessee Walking Horse named Ruby.

This is a face you don’t see very often in the store, but our customers that have been with us since the very beginning will know who Holly is. Holly used to be co-owner of our store along side her mother Carie (see above), but in the fall of 2015 sold her half of the store to her mom. Since then, Holly has gone full time into her pet photography business, BrindleBerry Pet Photography, and is still very involved in the Tail Blazers franchise and in the Copperfield location as a blogger and social media strategist. You can see her blogging and photography throughout this website!